I’m on the train to Köln, and a woman wearing a holstered gun on her hip just walked past. From her walk and her rucksack, I’d say she looked like a normal person rather than a plain clothed police officer. (Note for non-British readers: such a thing would be unheard of in the UK, as the UK has such a strong ban on guns that even police officers are not (with a few exceptions) armed).

Köln Cathedral has a lot of interesting fiddly bits on the outside, but is also covered in an incredibly ugly layer of grime. The contrast between it and the surrounding buildings is even more extreme than for similar gothic cathedrals in the UK, and the whole thing feels wildly out of place.

My first need in the city was, as usual on this trip, to get to the hotel; so I didn’t stay long by the cathedral. The bridge to the east is both rail and foot, and its fences are covered in enough love locks to put the famous love lock bridge in Paris to shame. The city to the east was a mixture of pleasant architecture and brutalist shopping districts that would be immediately familiar to anyone from the UK. However, one of the nicer looking residential areas I walked through had a surprise that would shock most British people: on a residential wall, there was a billboard with two adverts, the one on the left advertising the biggest brothel in Europe (or at least, that’s what it seemed to be claiming the “Magnum Sauna Club” was), the one on the right a public health campaign to always use condoms. 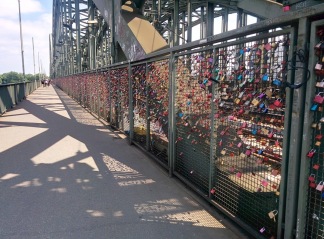 Seeing solar panels everywhere brings me joy. It’s a feeling that yes, the world is taking climate change seriously, and actually solving things now. There is an Aldi (budget supermarket) here, with a roof covered in solar panels, and it looks like the roof was designed with those panels in mind.

Something about the place gave me the feeling that Britain is an unfree country, but sadly my notes were not good enough to remind me why. Still, that is an interesting idea for a blog post about what ‘freedom’ means anyway.

The edges of the city of Köln (yes, I did walk from the main train station to past the city limits, that took something like two hours) are as sudden and magnificent as those of a rural English town: A block of flats and then, suddenly, countryside.

In part of the city that feels rougher, more worn down. Noticeably more German flags. I wonder which is cause and which is effect, if either?

Dense traffic at 15:30. Mere coincidence that that is the UK’s school closing time, as I’ve read that German schools close “between 12 noon and 1:30 p.m.”.

While wandering, I took a wrong turn and I think I ended up on somebody’s driveway. They opened a window and shouted at me anyway, and I did my best to apologise, leave and blame my phone (which I was looking at while walking).

Some of the blocks of flats have a lot of visible chimneys on them. Sometimes I remember how incredibly fast technological progress has been, and how recently open fireplaces stopped being the main form of heating in the Western world. Chimneysweep is still an official job in Germany, and (I’m told, my German isn’t good enough to check), the law requires you to let Chimneysweeps in when they call on you — if you don’t have a fireplace, they check the gas systems for carbon monoxide etc.

I didn’t see any beggars in Zürich or Heidelberg, but I didn’t realise that I hadn’t seen them until I reached Köln and saw them again. Some of the city centre public transport stops smell faintly of urine. The centre is far too crowded for people like me; in retrospect, I’d say it felt as crowded as the popular parts of Manhattan, except that Manhattan was designed for it and Köln’s city centre is struggling with it. Don’t get me wrong — you don’t have to go far if you want relaxed, it’s just that you can’t get it in the immediate area around the cathedral.

On the Rhine, I saw what looks like a two part boat, where the nose of one is pushing into a U-shaped hole in the back of the other. I have no idea what that was about, and couldn’t get a good picture.

There’s a lot about Köln that reminded me of Sheffield in the UK. I have the impression that similarity is not merely superficial, that Köln really is to Germany as Sheffield is to the UK.

All in all, it just wasn’t that interesting a place compared to the other places I visited. So onward I went; the next destination was Luxembourg City, which took me through Trier. Trier was so bad that my diary says “Trier Hbf lacks the sophistication of many of the other German stations I’ve stopped at. Reminds me of a typical British station.”